Advertisement
Posted in GeneralBS | Comments Off on Testing. Testing. 1-2-3 Testing….

A Private Word With Elon Musk, if you please.

Dude, “loan” me enough to buy as many shares of Twitter as “you think I should have” and I promise, on SWMBO’s life, that I will let you control them forever. I would even “gift” them to you when I die. Your vote would be my vote.

Contact me if we have a deal. Would thrill me no end to work with you.

Looks like I’m really a free speech slut. Get over it.

Posted in GeneralBS | Comments Off on A Private Word With Elon Musk, if you please.

There are few environmental issues with more unsupported claims than the effects of global warming on sea-level rise.

And such incorrect information is particularly egregious here in the Pacific Northwest.

One of the worst offenders is the Seattle Times, which published a problematic story this week. A story that was internally inconsistent, full of obvious errors, and making claims that are hyperbolic at best.

The Seattle Times claims include (all direct quotes):

None of these claims is remotely true.

NOAA has an excellent site that provides access to sea-level observations. Below is a map from their website, which shows that sea-level trends are not uniform over the region, with SEVERAL LOCATIONS SHOWING SEA LEVEL DROPPING, NOT RISING. (blue arrows indicate sea level is falling)

I repeat dropping. And for the remainder of the region, many of the sea level increases are very modest (the size of the arrows are the same for a wide range of trends). 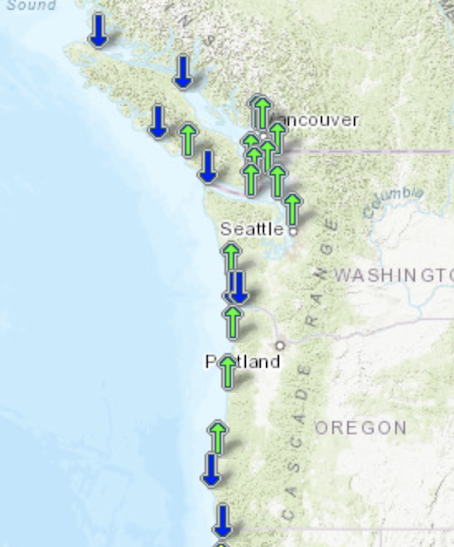 Why are so many areas showing sea levels falling?

Because the land is rising, for two geological reasons. One is called isostatic rebound; the land had been pushed down by the last glaciation and is still rebounding, causing sea level to drop. And the movement of the San de Fuca Plate under the North American Plate is causing portions the Pacific Northwest to rise (see USFS figure below), resulting in sea level either falling or rising to a lesser extent.

So we have some geological protection here in the Pacific Northwest. You don’t hear about that in the Seattle Times or by certain climate activists.

Now consider one of the few locations on the Washington Coast with rising sea levels: Toke Point. Here is the plot of sea level over its record starting in the mid-70s.

Barely rising at all. At this site, there is no acceleration in sea level rise during the past decades as the Earth has warmed. None. Zip. Nada.

With sea level DECLINING at most coastal locations in the Northwest and a tepid rise at places like Toke Point, this claim by the Seattle Times is obviously incorrect:

“The Washington coast could see as much sea-level rise — 4 to 6 inches — in the next three decades as it did in the previous century.

The largest sea-level increase in the region is at Seattle, so let’s examine its observations next (see below). The record at Seattle is a very long one…going back to 1900!

Sea level in Seattle has risen at a very steady rate over the past 120 years: by approximately 2.06 mm a year or 8.1 inches per century. There is no hint of acceleration of the upward trend, even with global warming.

And importantly, the steady upward trend over the past 120 years suggests that human-forced global warming is NOT the cause, since the impacts of human emissions have only been appreciable for roughly the past 50 years.

If the current rate of increase holds, sea level will rise by 2.4 inches in Seattle by the year 2050, a far cry from the 9 inches claimed by the Seattle Times.

And Seattle is the great outlier for the western interior. The sea-level rise at Victoria is ONE-THIRD as large, so the increase in sea level will be less than an inch by 2050.

Bellingham is rising even more slowly: by about .32 mm a year (1.16 inches per century)

I can show you more, but you get the point. Sea level in the Northwest is either nearly steady or falling on the coast, and rising very slowly in the interior. Based on past and current trends, and the absence of any acceleration of the sea level rise, the sea level rise over the next few decades should be modest at best.

A very minor problem at worst. You would think that the energetic, inquisitive reporters at the Seattle Times would check what has happened to see level before they wrote the article, and provide readers the needed perspective. They did not.

So where did the Seattle Times come up with all those excessive sea level rise projections?

They quote a new NOAA report. This report has a number of technical issues and problems. For example, a key Table (2.2) of the report claims that in the Northwest, extrapolation of observed sea-level rise trends would bring a 0.16-meter rise between 2000 and 2050. That would be 6.3 inches. As demonstrated above, that number is wildly in excess of the actual trends, which would result in zero rise on the coast and perhaps 0.5 to 2.5 inches in the western interior. 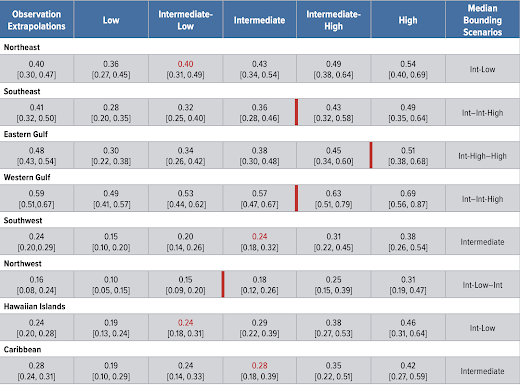 And somehow the Seattle Times increased that problematic 6.3 inches to 9 inches. I should note that this NOAA report uses unrealistic global warming predictions based on unphysical increases in fossil fuel use to get the real big estimates of sea-level rise that some folks like to talk about. Some of the numbers quoted in the Seattle Times article–as much as a 5 ft rise in King County by the end of the century–are pure fantasy.

The Northwest, like in so many ways, is highly favored to experience far lesser impacts of anthropogenic global warming than many locations. Our rising land is one reason. The slow warming of the eastern Pacific and favorable ocean current is another.

The Seattle Times article had substantial and obvious errors and attempted to make a very benign situation appear dangerous and threatening. This is not responsible journalism.

Please don’t leave comments calling me names (e.g., skeptic, denier, Trumpite, or worse). If you don’t like my analysis tell me where I got the numbers wrong. Global warming is a serious issue that requires that all of you are well informed so that you can elect representatives that will take practical, realistic actions (such as restoring forests and encouraging more nuclear energy). I have spent some time noting the frequent exaggerations and misinformation of the Seattle Times because the flagship regional newspaper should be doing far, far better.

Posted in GeneralBS | Comments Off on Misinformation about Sea Level Rise

Report Your Neighbor For Engaging In Wrong Think.